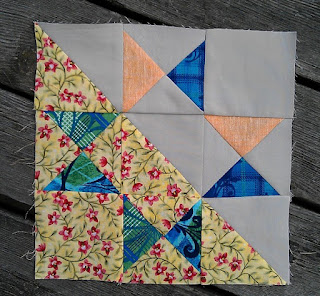 Here is my 11'th block in this BOM, I am close to finish!. I think these blocks will be put together in a lap quilt, I have an idea which fabric I will use as sashing. I have really liked being a part of this BOM, and I will probably join if it will continue for another year.

The Great Granny Along

During the summer vacation I joined the Great Granny along, but since I was far away from my sewing machine I had to wait until I got home to make one. There is a link to this sew-along on my blog.
I started making my first block yesterday, but instead of cutting the squares 2.5", I cut mine 1" square. The original square was approx. 12" finished, while mine is approx. 3.5". It was interesting making this mini, and I finished it as a mug rug/coaster. The plan is to make several more in the same style. 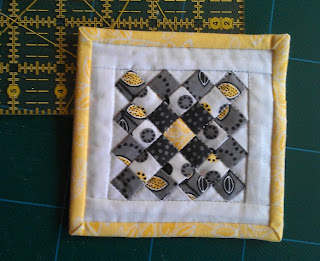 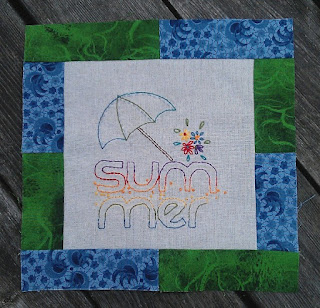 After returning from my summer vacation, my fingers were itching to start working with quilting and stitchery again. The first project in line had to be the Aurifil BOM, because I had to finish the block before the end of the month. I think it really turned out nice, with lots of great summer colors.

DS1 helped me make a new logo/banner for my blog. I really like the make-over, and I am grateful for him doing it. I hope this will inspire me even more to create great new quilts!
Love the design!
Posted by Anita at 23:56 No comments:

What it the next project going to be?

For the time being I have run out of projects to work on during my vacation. I only took a few hand-sewing projects with me, and I obviously worked faster than projected. Now I'll have to wait to do more sewing until I get home. This is then the perfect timing to make good plans. My list will (most likely) include these quilts to make:

1. July block of Aurifil BOM
2. July block of Blogger's BOM
3. Great Granny Quilt Along (link on my blog)
4. Charity Quilts (from Halloween fabric)
Here I have a sneak peek of a prospective pattern: 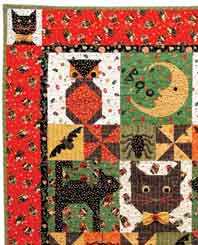 I hope you also have made good plans for future sewing! 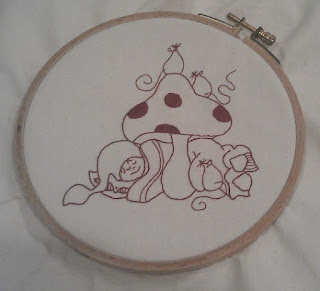 The first one you can find here . I'm looking forward to stitching more blocks, and finishing up this project by Christmas (hopefully).

Nine in the Window 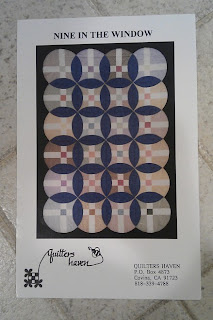 While visiting with some friends, I was given this quilt pattern called 'Nine in the Window'. I was studying the instructions for this design last night, and I think it will be an interesting and challenging quilt to make. It is a 'Quilt-as-you-go' design, and I have never done that before. But, the instructions make sense, and I will definitely put this one on my to-do list.
Thank you, Kathy! 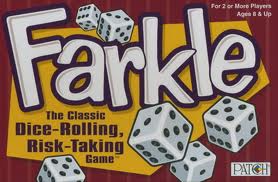 When visiting a friend's house we got introduced to this interesting dice game. It is fun to play for the whole family. The rules vary quite a lot from where you learn it. The only things needed to play this game are 6 dice, a pen, a sheet of paper, and a person who is smart and quick in adding.
Look it up in Wikipedia!
Posted by Anita at 14:43 No comments: 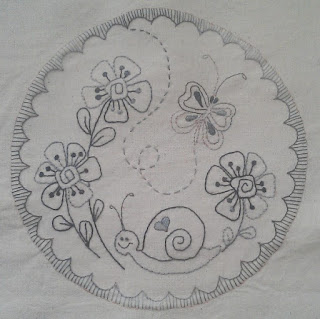 I finished the first stitchery of two that belongs to a table runner designed by the Norwegian designer AnnAKa. The pattern was in a previous issue of Quiltemagasinet, and I can honestly not remember the name of the design. I have not traced the second stitchery, that will have to wait until after the summer vacation.

But, I have traced another stitchery design that I brought along, and I will tell you more about that later.

July 4th started out as an ordinary day, even the thrash cans were emptied in the neighborhood. Where we were there was not much going until afternoon, this is due to the heat during the middle of the day.

Late afternoon the neighborhood party started. Everybody was asked to bring some kind of dish. I made blueberry-strawberry muffins. They both looked and tasted great. 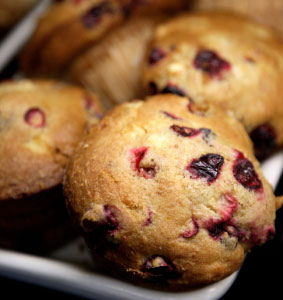 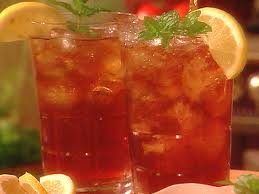 Appetizers, fried chicken and beans, coleslaw, and plenty other good dishes were served. Lemonade and iced tea were good companions with the food. We sat by the pool in a nice (warm) breeze and ate our meal. The temperature was around 35 degrees centigrade, but the breeze helped keeping us fairly comfortable. 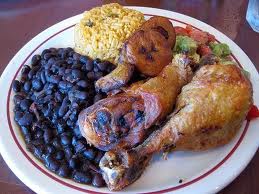 The dessert table was amazing, we could choose between lots of different desserts. I had a wonderful peach cobbler. 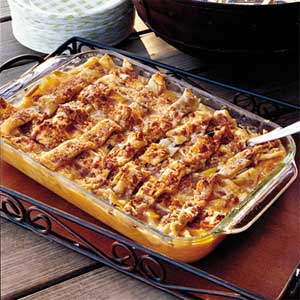 When it became dark, around 21:30, we went over to a huge parking lot where families were camping by their cars waiting for the fireworks. The show was being put on in a park nearby.

Exactly 21:45 the fireworks started, and it was a fantastic show. 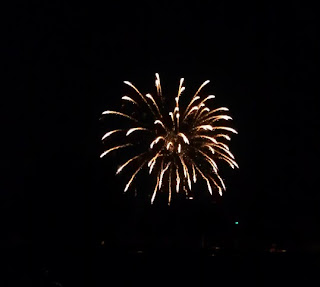 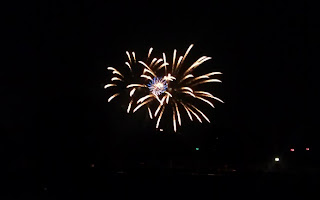 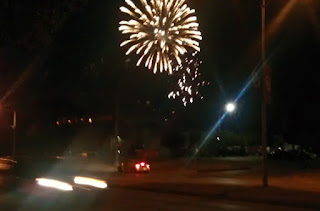 15 minutes later the show was over, and all the cars started heading home in a long, long line...
Posted by Anita at 03:08 No comments:

This is my first 4th of July in the US, and I am looking forward to see how it will be celebrated. It will be quite different from our own celebration of May 17th in Norway, that's for sure. I'll be back with more details... 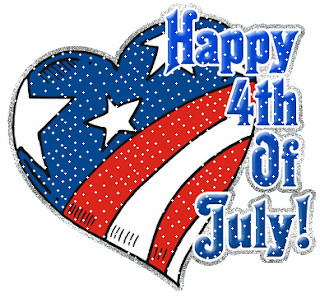 The new summer tablecloth in its proper place. It fits perfectly! (Sorry about the bad/non-existing iron-job, I will be done before its first official use.) 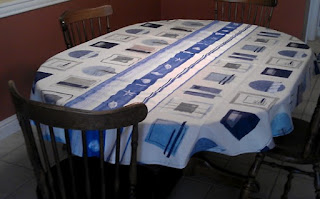 Here is a little hen/pincushion I made before Christmas, some time. It really decorates my shelf! 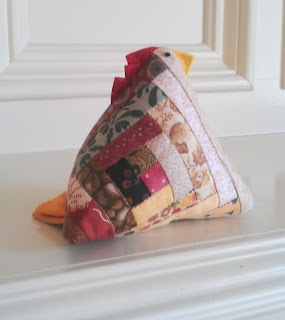 And I don't mean in Norway...
I am currently in the US experiencing temperatures way over 30 degrees centigrade. It is really hot! But I don't mind too much, it will soon get a lot colder when I return home.
Not much quilting going on here right now, I only brought a couple of stitcheries to work on.
I got really disappointed when I arrived here, though: The speciality quilting store here had shut down last week, what a bummer! I will miss it. Now I will have to turn to JoAnn's and Hancock's Fabrics. JoAnn had a couple of rulers I wanted, and I'll bring them home with me.